To get information relevant for your region, we recommend visiting our European website instead.

MyAdvantech is a personalized portal for Advantech customers. By becoming an Advantech member, you can receive latest product news, webinar invitations and special eStore offers.

The Advantech SKY-7223D is a 2U short-depth server that is designed largely for 5G telco use cases. Advantech has designed the SKY Series of low-latency edge servers to fit in areas of limited space and extreme environments, when compared to traditional data centers. Like most rugged telco servers, all the I/O access is through the front including storage, PCIe, and networking, a bit different from the company’s other servers. The server also has hot-swap elements built for easy, quick service in the field. 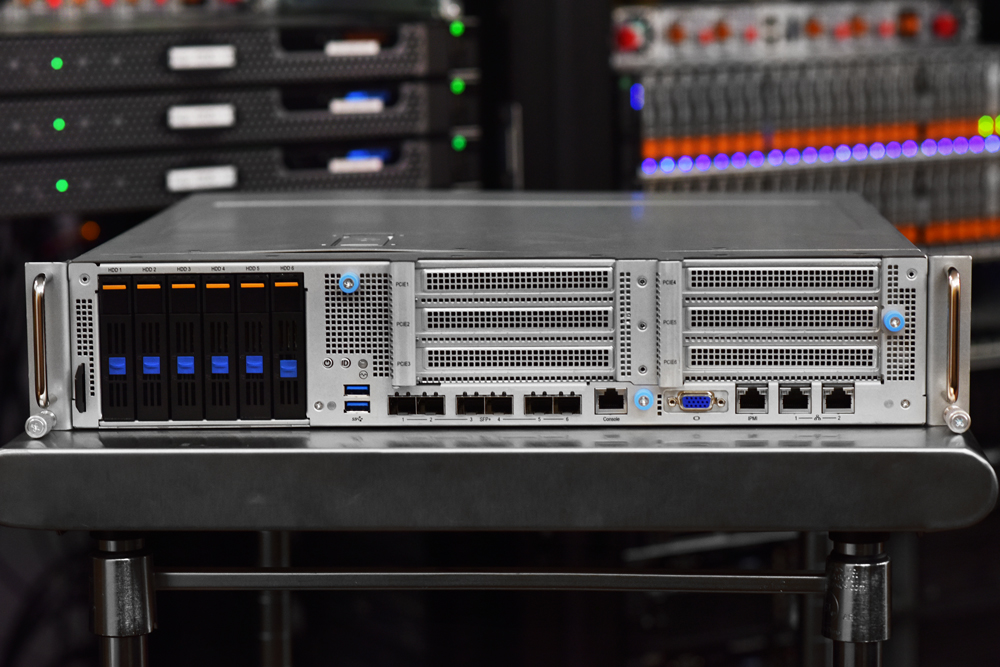 In recent years we have seen an explosion in IoT and edge devices. This can bring a multitude of benefits but at the same time is generating massive amounts of data that needs to be collected and analyzed. Sending this data to the core takes time. By leveraging edge computing servers, like the Advantech SKY-7223D, organizations can be more nimble and react more quickly. This holds true for use cases like real-time analytics, where the ability to run analytics at the edge is key to successful outcomes.

Under the hood, the SKY-7223D is powered 2nd Gen Intel Xeon Scalable processors (dual socket) with Intel QAT and DPDK to improve overall performance. It also features 16 x DDR4 DIMM slots (12 x channels, up to 2933MHz) that surround the CPUs. The server supports six 2.5″ SATA bays or two 2.5″ SATA bays and 4 bays that house 2.5″ U.2 NVMe drives. At just 17″ deep, the server can fit in a variety of rack configurations. These include traditional telco use cases, either near or on a cell tower for instance. The server also does well in industrial and other use cases where its compact body and increased environmental tolerances are useful.

Advantech can make their edge computing servers highly customizable to fit users’ specific needs. For our review, we have more of an off-the-shelf model to get an idea of how it runs.

The Advantech SKY-7223D is a rugged-looking server that features a nice, compact overall design. As this is a telco server, the layout of the rack and the server itself is a bit different compared to the traditional ones you mostly see. For example, telco server environments often use two-post racks (compared to the usual 4-post racks), which comprise of just two vertical posts and are placed (or sometimes bolted) on the floor. They are purpose-built to better handle certain IT equipment that telco environments require.

The openness of telco racks allows for much easier access to the equipment. It also provides a better cooling design (as they are not enclosed like 4-post racks) for better airflow circulation and exhausting hot air. They are also easier to disassemble and move around the server room, are space-efficient, and are ideal for applications where a locked cabinet isn’t required.

The other unique feature of telco servers is that nearly all connectivity is located on the front. This is due to the nature of telco environments, as IT staff often need access to the ports and connectivity while working with the server. A nice side benefit is staff generally won’t have to subject themselves to “hot aisles” with these types of servers. 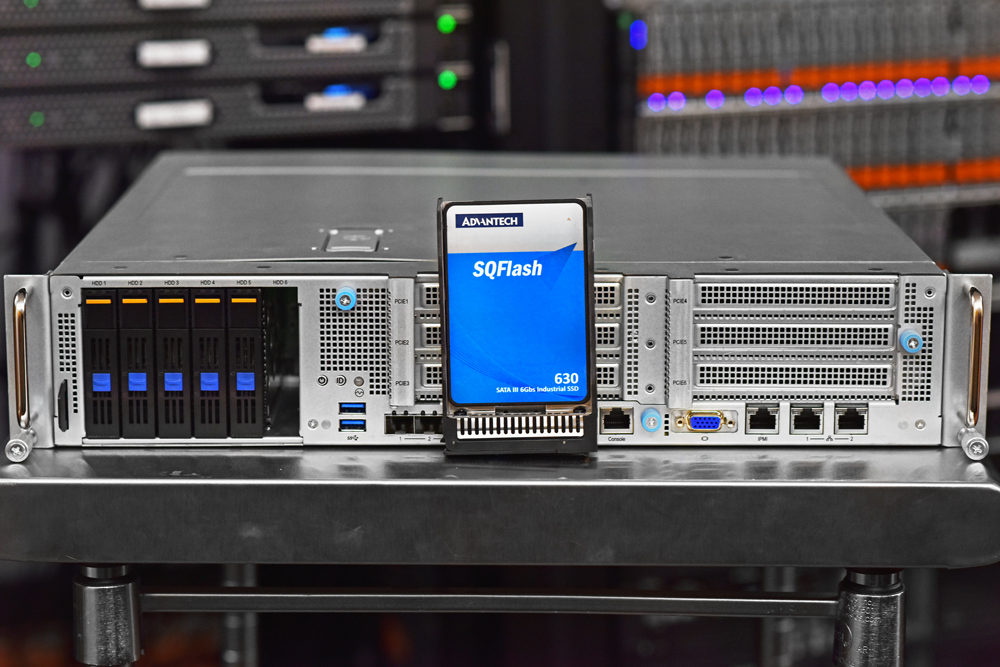 On the left of the front panel are the drive trays, which house six 2.5″ drives. These can be configured in SATA only, or a mixed SATA plus NVMe combination. Advantech also manufactures their own SSDs; they included both a SATA and NVMe SKU with this build. As you can see, there is also ample ventilation on the front panel so the fans can do their job effectively and exhaust heat from the server. 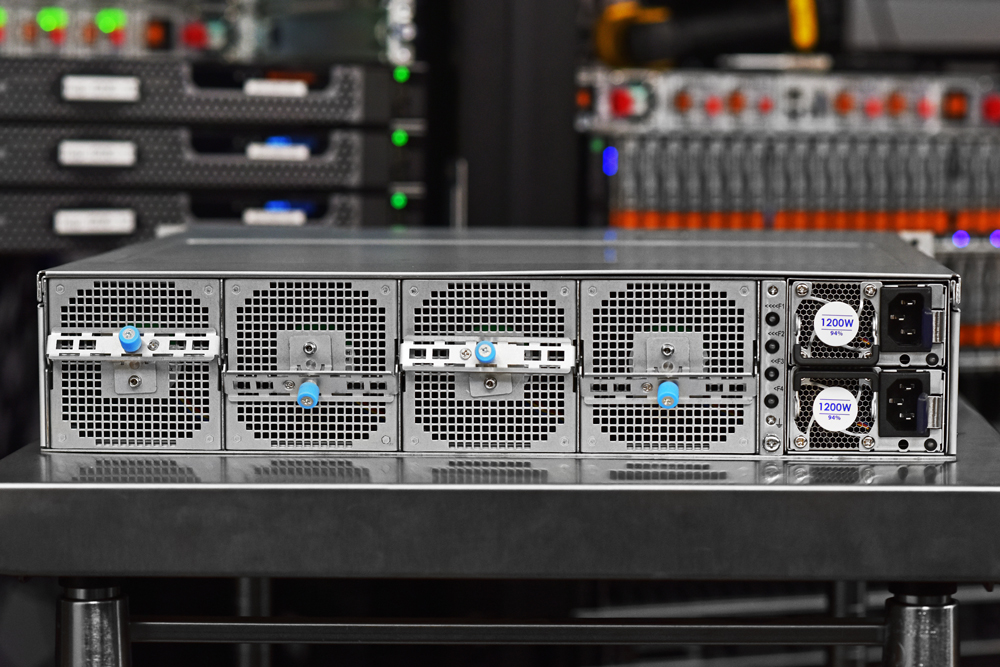 Turning the server around, you will see the four large 8056 fan modules, which can be easily hot-swapped out by simply unfastening the screws and pulling the individual handle out. To the right are the 1200W CRPS power supplies, which also can be easily pulled out and replaced as needed.

Opening up the cover, we can easily see the two CPUs and surrounding DIMMs. And even though the server is short by data center standards, there’s plenty of room for PCIe cards, including GPUs, in this box. 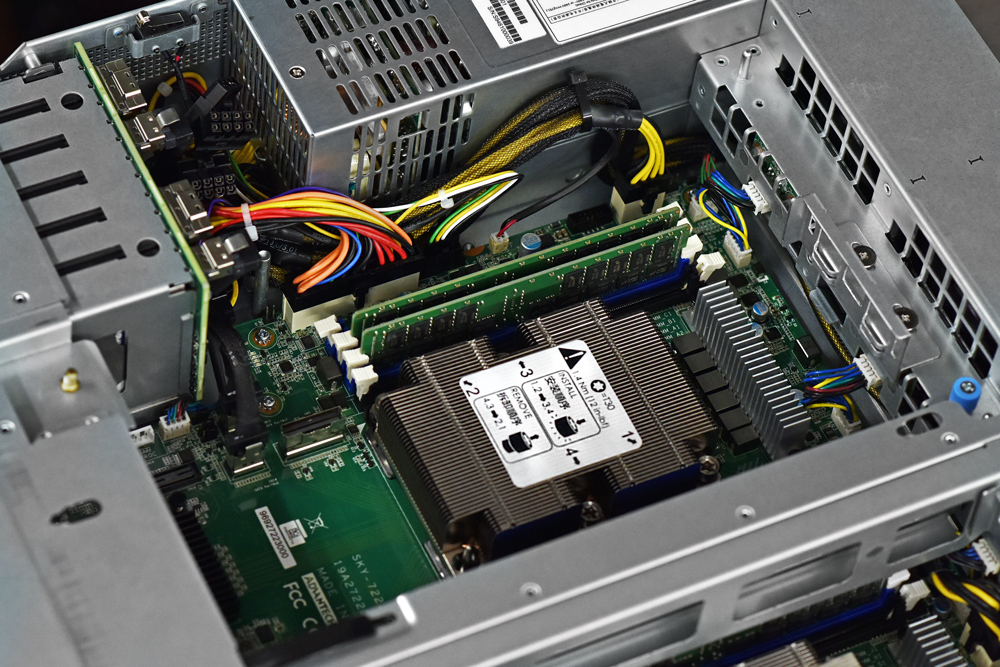 Above we can see storage connectivity from the motherboard that supports SATA, SAS, and NVMe.

The Advantech SKY-7223D’s management is nothing fancy, just a simple layout that works. To take a gander at the hardware, we click on advanced inventory. Through the sub-tab of CPU, we can see the two Intel Xeon Gold 6230N CPUs. 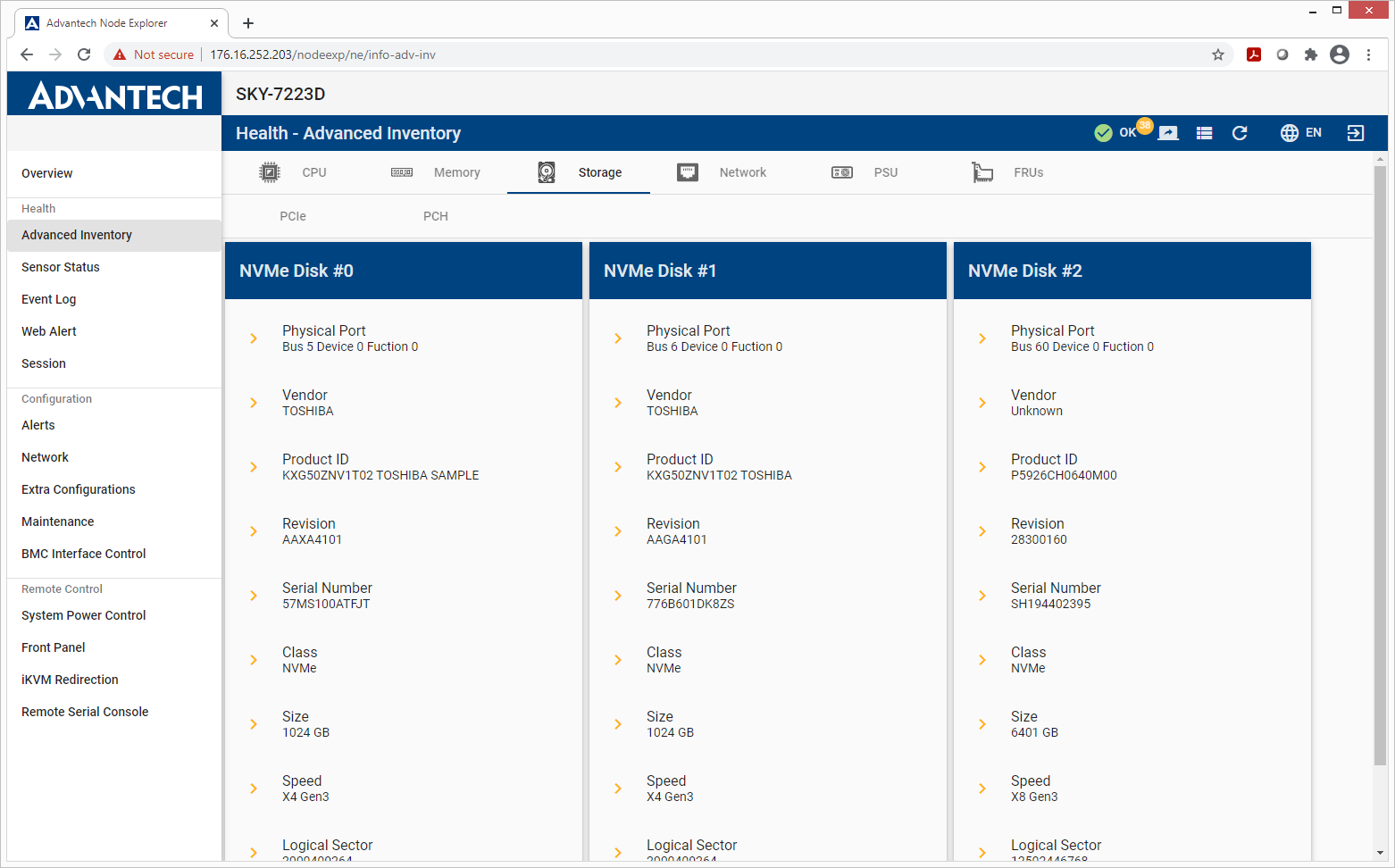 Through this same main tab, we can check on storage and see the connected NVMe storage drives.

We can also remote in through the HTML5 interface and attach storage for easy software installation.

While storage is very flexible inside the Advantech SKY-7223D chassis, we tested it with a Memblaze 926 enterprise SSD as well as two Toshiba XG5 SSDs.

When it comes to benchmarking storage arrays, application testing is best, and synthetic testing comes in second place. While not a perfect representation of actual workloads, synthetic tests do help to baseline storage devices with a repeatability factor that makes it easy to do apples-to-apples comparison between competing solutions.

These workloads offer a range of different testing profiles ranging from “four corners” tests, common database transfer size tests, as well as trace captures from different VDI environments. All of these tests leverage the common vdBench workload generator, with a scripting engine to automate and capture results over a large compute testing cluster. This allows us to repeat the same workloads across a wide range of storage devices, including flash arrays and individual storage devices.

The Advantech SKY-7223D is a 17″ deep, 2U, dual-socket, 5G telco edge server that is made for edge deployments. Being a telco server, the device has the IO on the front, including networking and PCIe expansion, which are normally on the back of the server. The server comes with up to two 2nd gen Intel Xeon processors, 16 DDR4 DIMM slots, and six 2.5” drive bays supporting SATA, SAS, and NVMe. The PCIe slots add the option of more storage, faster networking, or GPUs for specific use cases at the edge such as AI. To top it all off, the company can customize the server, tailoring it to users’ needs.

In our testing, we leveraged two M.2 client SSDs inside as well as a PCIe NVMe SSD installed inside. This was to show the various storage possibilities inside the server, which will really come down to how it deployed in its production setting. Advantech allows for many storage configurations inside the SKY-7223D, through the use of traditional 2.5″ media to M.2 NVMe SSDs inside or making use of the PCIe slots themselves.

Overall there is a lot of potential for this platform out in the wild, no matter if it’s inside the data center or somewhere much more remote. The short depth gives it a lot of deployment opportunities, without sacrificing support for features like GPUs, which are increasingly in-demand for real-time analytics workflows at the edge. The server can also easily be tuned for storage or I/O heavy workloads. Lastly, Advantech will customize the platform for those who have a more specific requirement. While this is primarily targeted for telco use cases, there are surely industrial and others that will benefit from the SKY-7223D’s flexibility and sturdy build.

Việt nam
Panel Button
Visit the Advantech Global website, or choose your country or region below.